The Moment I Became An English Channel Swimmer

Hello everyone and welcome to this special blog where I look back at having just completed my 14 hours and 52 minutes Channel swim. This is the last day of my first month as an official English Channel Swimmer, and my 23rd birthday, so I thought it would be the perfect opportunity to reflect on the swim. After almost 14 hours of relentless swimming to the French shoreline, the small two-person dingy had sped past like a knife through butter, bouncing from wave to wave, leaving me feeling me feeling like an old post-holiday lilo. It soon cut its engine so I knew I must be close. I vividly remember hearing the somewhat nervous and confused voice on the support boat slowly drifting away. I was left with the thought that I must be finally get close to the beach, and that I was about to become a Channel swimmer. For the last two hours I felt like I had put so much effort into each and every stroke. I felt like I was sprinting, getting my stroke rate back up to 48 strokes per minute (just 5 strokes less than my speed within the first hour). My shoulders were burning and my arms felt like two long paddles repeatedly hitting the waves. I could still hear the shouts from the crew and Phil, who had been pushing and motivating me every bit of the way. There was also the odd faint noise of Tim and Matt who appeared to be out gunned by the first two barrels of shouts as I came ever closer to achieving the title of a channel swimmer. I have never felt my body go through such pain like it before, but the shouts of encouragement gave me the will to just keep pushing myself, stroke by stroke. It was pitch black all around me, the only light came from the support boat’s spotlight which was constantly targeting me. To the crew, I was soon to become just a small green flashing light at sea.

At one point whilst my left shoulder reached the sea, shortly followed by my heavy right arm, a shocking force hit me. At the time it felt like I was hit by a bus due to the pure intensity of the wave. The pure shock sent my left shoulder, mid-stroke, flying back out of the water. With the boats ever increasing pace, I instantly resumed my swim despite what had just happened. I shouted out in complete confusement to the team, “I think my shoulder just got hit by a log”. Phil’s quick reply was clear, “keep going mate, just keep going”. By now all thoughts were focused on every single stroke. It was only until after the swim that the team revealed that it wasn’t a log that had hit me after all, as I had initially believed; it was in fact a plate-sized jelly fish swimming straight into me, encouraged by the added force of the wave.

By now all three parties (myself, the support boat, and the two-man sized boat) were looking franticly around in desperate search for the beach. Finally the shout I had been waiting for came, “land ahead!” – the two boats with a higher eye level could see the beach was straight ahead. The final and long-awaited push was on. I put all of my trust into the crew. I was in complete darkness staring at the distant street lights in the back ground. As the small two-man boat stopped and turned, I heard the shout that even after almost 15 hours of constant swimming made me smile; “swim into the light, swim towards the light”. The waves got faster and harder, parallel to the increasing feeling of frustration that washed over me. I felt like I was getting bashed about over and over again, this felt like a fight with the sea.

In response to what felt like personal assault, I carried out hard and fast-cutting strokes. There was no way I was not going to get passed this last stretch of sea. The sight of the golden and beautifully picturesque sandy beach magically appeared before me. I was in shock; to be quite honest I was expecting stones, rocks and boulders. My initial plan was to bring back some of the French rocks with me as a memoir, but this didn’t seem possible. It is something that most Channel swimmers try to do and the swimmer before me, also one of my fellow British Dover training partners, forgot to do. I am still determined to get a rock to symbolise my accomplishment when I visit the very spot in November before the annual swimmers ceremony. “As soon as your up and the horn has gone, swim back to me as fast as possible! We are in shallow waters”. I could feel how close I was and the thought of the first step on land as an English Channel swimmer was about to happen. A flood of happiness took over my body, concealing all of the pain I was feeling. This was it; after what seemed like a lifetime of swimming, the first step into the unknown. It was going to be the step that proved to all of the doubters, haters, and disbelievers that I could actually do this. My weightless foot came to a soft landing as I took my first step. I had done it. I became a Channel Swimmer. All the memories came flooding in; the tough swims in a lake in Bedford. The nerves before a national swimming competition – my hands were shaking uncontrollably and then winning that race in the pool and running up to the girlfriend in the silent crow. I had repeatedly defended myself that this wasn’t one crazy and impossible dream that had foolishly taken over my life. I was doing this for the two swimmers who had lost their lives during the time of my two years of training, and of cause I was doing this for my father. I turned to the ever blinding light from the spotlight and suddenly the jubilant shouts from the crew overwhelmed me. I smiled with pride, raised both hands into the darkness and a calmly whispered directly up into the sky; “Dad, this was for you.” 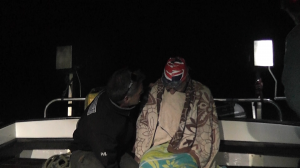